The Střelecký ostrov – A calm oasis in the middle of action 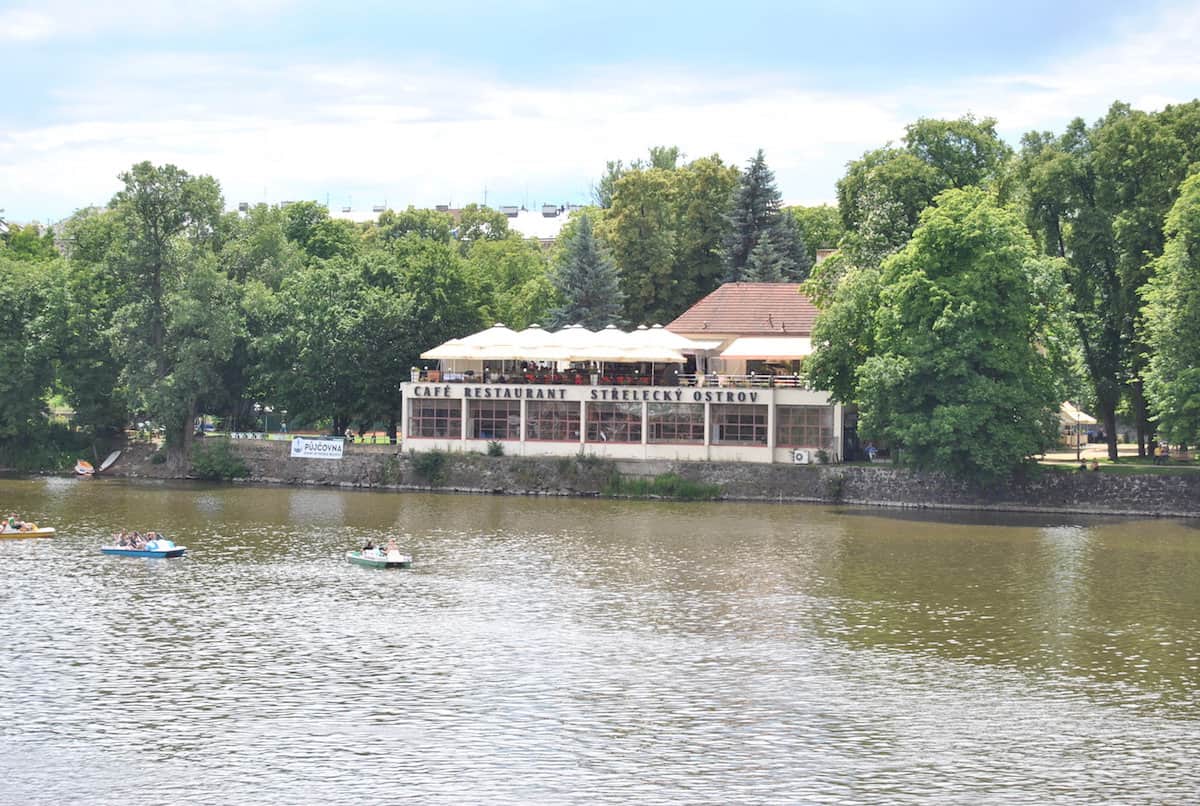 The Střelecký ostrov (roughly translated as the Shooters island) is one of ten small islands on the Vltava river, that are within the city area. It is crossed by the Bridge of Legions (Most Legií), and connects the Masarykovo and Smetanovo embankment on the western side of Vltava with the Janáčkovo embankment on the East.

The length of the island is 480m, while the widest place across is 85m.

The first written mention of the island´s usage dates back to the 12th century, when it was called Trávník, and belonged to the Johanites (the Order of Knights Hospitaller), who used it as a garden. During the reign of Charles IV., the island was used as a practise range for Prague‘s archers and crossbowmen.

It was abandonned during the Thirty Years War, and for a long time stayed desolate. Then during the 18th and 19th century, it began being used again for shooting practise and competitions, as well as public celebrations often accompanied by fireworks and celebratory salvos. Because of this tradition, the island has gotten its name. In 1882, the first Sokol festival was held there, with (for the era) unbelievable 2500 participants. In 1890, it was used for the first Czech celebration of May the 1st. During the Protectorate, it was used by the Prague‘s branch of Hitlerjugend.

After the original wooden shooting range was destroyed by fire, the Club of Prague’s Sharpshooters has built a new brick building in the Empire style with a pub in 1812. In 1842, the current building was renovated and expanded, adding a terrace, a café, a loggia and even a cinema hall on one of the floors. The building is currently noted and protected as a cultural heritage. The front of the pub carries an inscription saying: Nobis et posteritati (To us and our descendants).

The southern part of the island with the restaurant building was given to the Czech physical education union „Start Prague“, that added some sporting grounds behind the building.

The island with its building has suffered a lot in the past by floodings of the Vltava river: the pub building has had to withstand the large floods in 1890, as well as the largest recorded flooding in 2002, that has caused such severe damage, that the island was reopened a whole year later in 2003.

In 2012, an effort to revitalize the island was started, adding sand walkways, benches, children playgrounds, new trees were planted, new guarded bathrooms and an elevator, allowing entry for people with disabilities and parents with children in strollers. Short time before the project was finished, the island was flooded again in May of 2013, prolonging the restoration effort and postponing the opening once again.

Before you go take a rest to the island, and enjoy its calm and serenity, don’t forget to check the Visiting Regulations. For example, things that are prohibited on the island include riding bikes, drinking alcohol outside of the restaurant area, walking an unleashed dog or starting fires – all of that is enforced by the City police officers.

Despite the numerous restrictions, the island remains lively and spirited: just last year, a new “boho“ café was opened there (as in socially unconventional way, typically associated with and characteristic for creative artists – bohèmes), where you may feel like in a small hippie café in the middle of Bali. The centre of the establishment is an old minivan, with an extensive choice of drinks, that you can take with you to have a seat in the stylish surroundings of the park. You can only pay with a credit card however, and all the tips you leave to the staff go to abandoned cats and dogs.

You can also look for refreshemnt on the Vltava river, as there is a recently docked pontoon ship with a bar.

The island offers exceptional views from the level of the river. The National Theatre, Novotného bridge, Sovovy mills, the Charles Bridge and Mánes, as well as other historical buildings are visible on both banks of the river, in quite a different perspective, than from the streets.

Occasionally, there are various celebrations, concerts and other cultural activites being held on the island.