What I need to know

Hotel Rott is situated in the very heart of Prague, just a few steps from the Old Town Square, the main historical point of the city. All essential sights and monuments are within a walking distance of the hotel:

Wenceslas Square, Charles Bridge, Jewish town, Prague Castle with adjoining gardens and palaces of the Little Quarter. Hotel´s location is convenient also for shopping: there are numerous large shops and shopping malls within an easy and short reach of the hotel.

The hotel building is located in the very centre of historical city and it is therefore not possible to park your car in the direct vicinity of the hotel. We offer a possibility of parking in the underground garages underneath Rudolfinum, just 5 minutes walking from the hotel. Upon your arrival at the hotel and after you unload your luggage, you get a parking card and simple plan how to get to the garages at the reception.

How to get to us?

How to get to us?

you can use hotel taxi, which is to be booked with the hotel reservation department or reception, public airport taxi service is another option. For public transport, the bus line 119 terminates at Veleslavin metro line A, 5 stations off Staroměstaká station – just 300 metres walking to the Prague Old Town hotel. Tickets for public transport can be bought at the airport (look for PID system – Prague integrated transport).

either taxi service is available, bookable through the Reservations or the reception, or take the Metro line C Hlavní nádraží station, just one stop to Museum. A change to line A will get you in two stops to Staroměstaká, just a few minutes walk off the hotel. The tickets for the public transport can be bought at the manin train station (look for PID system – Prague integrated transport).

Have a look and compare the prices of flighttickets for your visit of Prague and Hotel Rott!

Gift vouchers are available for the accommodation and Restaurant or Café  in any value you might wish. Please your  beloved ones or friends with an unusual gift – hotel stay, dinner or just a coffee with a cake! For purchase of a personalised gift voucher, contact please our reservation department at reservation@hotelrott.cz

The buildings of hotel Rott and the whole Little Square are located in the oldest inhabitated part of Prague, some sort of human habitation was standing here most probably as early as in the 8th century. In 1232, the Old Town of Prague gained the municipal privilegies. Almost all houses on the square have Romanesque  underground spaces, in fact the original groundfloors of early medieval houses. The plan of the Little Square remains unchanged since than, just the image of houses underwent many changes. Narrow Gothic houses merged into larger  housings in the Renaissance times, and within the following  centuries their were given  appearances corresponding with the architectural aesthetics of the successive periods- Baroque, Classicism, Neorenaissance, etc. Present architectural image of the square is combined mainly of Rennaissance, Baroque, and the 19th century styles.

The fountain with the beautiful grid standing in the middle of the Square is at the same time  the symbol of the Square, and also a part of Hotel logo. It dates back  to 1560.

The buildings of the hotel (the front – main house facing the Little Square with the paintings of Mikoláš Aleš, and the corner house to Linhartská street) have large parts of early medieval walls in the underground, and they  were rebuilt many times. They had 3 groundfloors in the 16th century, and the main house boasted rennaissance  sgraffitoes. In Baroque, high gabled  roofs were built,  converted into an Empire style attics in the 18th century. In 1855, an ironmongery was opened in the main house, which  gradually expanded in the neghbouring houses, too.  The present neo-renaissance facade dates back to 1897, and it was the first house in Prague converted into shopping mall with glass concrete ceiling cupola in Prague, bulit  in the years 1922-23. The ironmongery „U Rotta“ was – within 1850 and 1950 – the largest business of its  kind in Bohemia. In 1996, the store was moved into today´s spaces in in the side wing of the building, and both buildings were converted into the hotel.

We are the winners of the  Czech Hotel Awards (based on public votes) – best ****hotel in Prague 1 – the historical centre of Prague! Thank to all of you, our dear guests, for your votes!

Our hotel will open its gates in July 2021 – and you are warmly invited to make your reservation – and to come and stay with us!  To make your decision making easier and safer, no reservation needs prepayment and they all can be cancelled till 48 hours before the arrival free of charge. And in the case of some new state pandemic measures even till your arrival day!

Booking has never been easier – and we cannot wait to meet you here in the heart of Prague again! 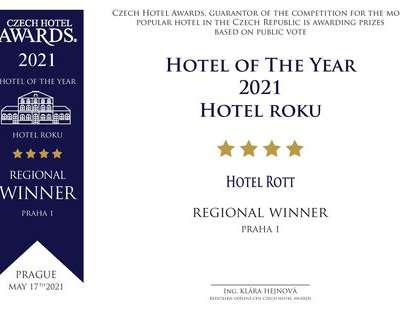