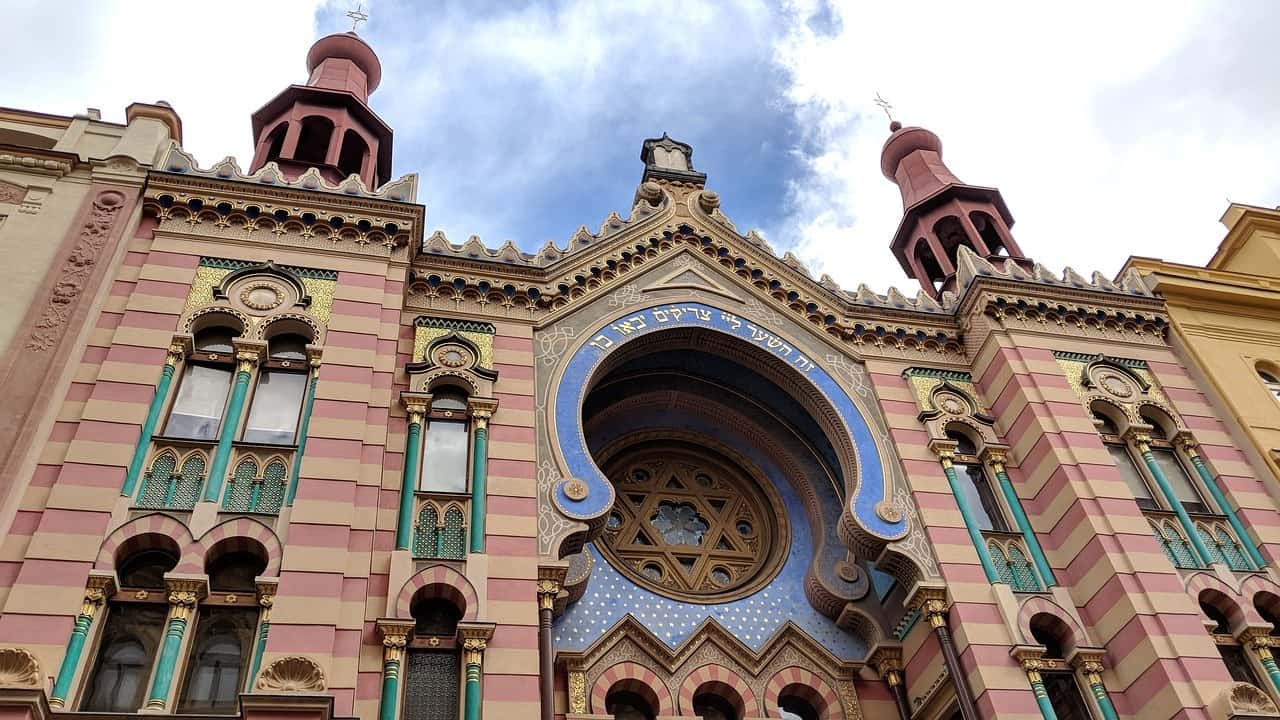 Expedition into the history of the Ghetto and its famous natives Rabbi Löw and Franz Kafka.

Historical appearance of the Jewish Town

Come with us for a walk through one of the most mysterious parts of Prague. Like every medieval town, Prague also had its Ghetto, the Jewish Quarter with residents segregated from the Christian majority. Around the second half of the 16th century, the Prague Jewish community was the largest in Europe. The real image of the Jewish Town from the first half of the 19th century can only be seen on the Langweil model (Muzeum hlavního města Prahy – Na Poříčí 52). This unique cardboard model of the 1820s and 1830s is the only testimony of the appearance of many parts of the town before the so called „ sanitation works“ that took place in the last decade of the 19th century and completely changed the face of several quarters. All municipal buildings of the Jewish Town were razed to the ground and there only remained 6 synagogues (7th one is in the New Town), the famous old Jewish Cemetery, the Town Hall and the statue of Moses by František Bílek (1905, Pařížská Street in front of the Old-New Synagogue).

Jewish merchants were coming to the area already in the early centuries of the Christian era and settled in places of particular importance for trade. Jews in the 11th and 12th centuries had the same status as other foreign merchants and were equal with them. Jews came to Bohemia from two sides: from the east and from the west. The original Jewish population settled to places around the Old School – Spanish Synagogue. From the west they came together with the German colonists a little later and settled around the Old-New Synagogue they had built.

The Jewish population throughout the world has preserved its own identity since ancient times by building its own system of closely related self-government and religion. Self-government and worship were concentrated in Jewish schools (synagogues).

The oldest surviving Jewish prayer house in Central Europe is the Old-New Synagogue, an early Gothic edifice with two aisles. Its rich sculptural decoration shows the naturalism of High Gothic. It probably dates back to around 1270. The Jews believed that it was brought to Prague by angels from the promised land, and therefore survived all pogroms and a number of fires.

In the close vicinity of the Old-New Synagogue is the Jewish Town Hall. Its building has two clocks, one classic with Roman numerals on the turret, the other decorated with Hebrew numerals in the shield. This synagogue was erected at the end of the 16th century and it was rebuilt in Baroque style around 1760. Adjoining it at the back is the former High Synagogue, dating from the second half of the 16th century. In Široká Street, once the main street of the Ghetto, is the Gothico-Renaissance Pinkas Synagogue, erected on the edge of the Jewish Cemetery in the second half of the 15th century. Today the building contains a memorial to the Jewish victims of the Second Wolrd War. In the street „U Starého hřbitova“ is the Klaus Synagogue, completed in 1680 and later rebuilt in modern style. It now houses the ethnographical department of the State Jewish Museum with a unique inventory. In its vicinity there is the former mortuary in Neo-Romanesque style; now another part of the Museum showing the building history of the Prague Ghetto. The Klaus Synagogue and the mortuary adjoin the Jewish Cemetery, first acquired as a burial ground in the first half of the 15th century. The cemetery is one of the most remarkable features of the Jewish Quarter. Burials were made here up till 1787, ceased for hygienic reasons. Many interesting gravestones from the 15th to the 18th century, nearly all with Hebrew inscriptions, have survived. The oldest tombstone dates back to 1439 and belongs to Avigdor Kara, the youngest one belongs to Moser Beck.

Rabbi and his Golem

On one of the monuments, a Renaissance tomb, is an inscription intimating that it is here that  the Rabbi Yehuda Löw lies buried. He was on terms of friendship with the famous astronomer, Tycho Brahe, and was frequently received by the Emperor Rudolph II, which in those days was a rare honour for a Jew.

Many strange stories are told about the Rabbi but the strangest of all is the legend of how he created an artificial being, a Golem, which served him. It was made of clay and the Rabbi brought it to life by putting a shem, a tablet with a magic Hebrew inscription, into its mouth. For long the Golem served the Rabbi and, unlike its human counterparts, needed neither food nor rest. Only on Friday evening, the beginning of the Jewish Sabbath, when all work in sinful, the Rabbi took the shem out of the Golem´s mouth, whereupon the man-made creauture became as lifeless as the clay of which it was formed. One Friday evening, however, the Rabbi forgot about the Golem and, when he was at his prayers, the people came running to him panic-stricken and told him that the Golem was destroying everything in its way, without clear commands. Everybody ran away, but Rabbi Löw went home, fearlessly went up to the Golem and took out the shem, and the huge figure crashed to the ground. The Rabbi returned to his prayers, but he never brought the Golem to life again. The „man of clay“ was taken to the loft of the synagogue, where it turned to dust …

Equalization of Jews and the End of the Ghetto

The Jews did not become full citizens in Austria-Hungary until 1849, in connection with decision for extensive changes of the newly succeeded ruler Francis Joseph I. Which was a beginning of the gradual end of the Ghetto. Wealthier Jews began to move beyond its borders or outside the country, some of them imigrated for better to America. A process that is reflected in a novel by Franz Kafka entitled America.

The plaque with the bust of Franz Kafka on the corner of Maislova Street next to St. Nicholas Cathedral indicates not the house, where Kafka was born, but only the place of his birth. The original building (former Benedictine monastery where Kafka was born in 1883) was demolished at the end of the century. Only the portal of the old building was preserved, being installed in the new house. The little square entouring the house has been recently named after the famous author.

Since 1885 the family started moving to many different houses around the Old Town, always looking for convenient spaces for the haberdasher business of his father. Franz spent part of  his childhood in the renaissance House at the Minute next to the Town Hall in 1889-1896. Later the family moved to the Golz-Kinsky Palace, standing next to the Týn´s church. There was also a German grammar school in the building, that Kafka  attended and graduated from. Kafka was learning there also the Czech language… After graduation in 1901 he started studying – rather fulfilling father´s wish then his own intentions – the law faculty of the German branch of Charles University. His main interest was literature, but he failed to become financially independent. Franz Kafka’s life seems to be a constant struggle with his materialistically oriented, successful and physically fit father. This implies Kafka´s complex, both physical and mental. From 1908 he had a part-time job in an insurance company, but his main obsession was writing: n 1912 he wrote his novels „Proměna“ (The Metamorphosis) and Topič“. For „Topič“ he received the first literary prize in 1915. His metaphorical novel „Proces“ (published by Max Brod in 1925) was created in 1915, and in 1922 Kafka wrote „Zámek“ (The Castle).

At that time he moved around Prague very often, he lived in the Lesser Town, even in the Golden Lane or in the Schönborn Palace, where the US Embassy now resides – he was seeking peace and inspiration, and probably his own inner and outer independence. In 1917 he was diagnosed with tuberculosis, the last 7 years of life alternated between sanatoriums and family stays. Kafka is buried in the Vinohrady Jewish Cemetery, along with his parents who survived him for several years. From his therapeutic stays he wrote letters to them and their sisters, these were published under the title „Letters to Parents from 1922-24“. On his grave there is a plaque with the names of his three sisters, who died with their families in concentration camps of the Second World War.

Kafka also dealt with the history of the disappeared Jewish Town and the nostalgy for it, he wrote: „We still have memories of dark corners, mysterious alleys, blind windows, dirty courtyards, noisy pubs and stout taverns. We walk through the broad streets of the new city, but our steps and looks are uncertain.”

Memory of The  Jewish Town

After the sanitation there was a longing in the Jewish population for the historical memory and appearance of the Jewish Town / Ghetto. In 1850 the original independent town was attached to the rest of Prague and was given the name Josefov to commemorate the emperor Joseph II, who partially equalized the Jewish population.Today’s borders of the original Jewish settlement are Pařížská and Platnéřská Streets, and from Hotel Rott you can reach the middle of this place full of history in just a few steps…